Takaya Hattori was born in Nagoya. In 1989, he entered the Aichi University of the Arts Faculty of Music, and in 1993, the year of his graduation, he won both the Kuwahara Award and the Yomiuri Rookie Music Award, and joined the New Japan Philharmonic Orchestra. Hattori has been Principal Trumpet of the orchestra since 1998. In 1999, he was given the opportunity to learn at the Mannes School of Music in New York as an overseas trainee of the Affinis Arts Foundation. As a soloist, Hattori has performed the Haydn concerto and the Shostakovich concerto with the New Japan Philharmonic Orchestra, and has performed the Haydn and Hummel concertos with the Aichi Chamber Orchestra. He currently serves as an associate professor at Showa University of Music since retiring from the New Japan Philharmonic Orchestra in 2019. He studied with Yoshiaki Takemoto, Naohiro Tsuken, Chris Gekker, and Vincent Penzarella. Hattori is a member of the Nagisa Brass Solisten, and he is a part-time lecturer in the Conservatoire Diploma Department of the Shobi College of Music. 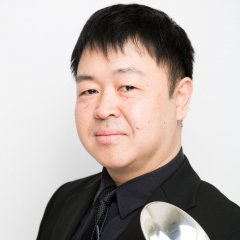