Atsushi Okamoto graduated from the Kunitachi College of Music before studying at the Graduate School of the Tokyo University of the Arts. After his performance for the Royal Family in the Tokagakudo Concert Hall of Japan"s Imperial Palace, he made his debut at the Palazzo Sersanti performing as Count Almaviva in "Le nozze di Figaro." "l"opera" magazine praised his "brilliant noble voice." He has actively performed both in Japan and overseas, and has released solo albums such as "AVE MARIA," "VIVERE," "Wolf!" and "Al di là." Okamoto has received numerous awards, including first prize in the 22nd HIMES Competition, second prize in the Bösendorfer International Music Competition "Sviatoslav Richter" in Vienna, and the Special Prize in the Concorso di Canto lirico internazionale "Francesco Albanese." In 2011, he was selected to participate in the Japanese Government Overseas Study Program for Artists provided by the Agency for Cultural Affairs. He is currently a member of the Tokyo Chamber Opera Theatre and serves as a lecturer at Hokkaido University of Education"s Music Course, director of the Hokkaido Mozart Association, and assistant producer of the International Mozart Festival in Hokkaido. This is his second consecutive appearance at PMF. 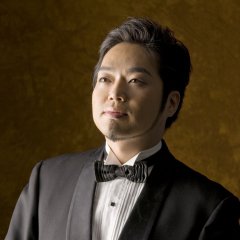