Kanae Kushima graduated from the Tokyo University of the Arts and further studied at the New National Theatre Opera Studio. She also studied in Milan on a grant from the Agency for Cultural Affairs. Kushima is the first prize winner of the 54th Student Music Concours of Japan, and of the HIMES Competition. While studying at the Opera Studio, she made her debut at the New National Theatre by performing as the shepherd boy in "Tosca." Since then, she has participated in many productions and performed roles including Frasquita in "Carmen," Giannetta in "L"Elisir d"Amore," Susanna and Barbarina in "Le nozze di Figaro," and an Esquire in "Parsifal." In 2005, Kushima was invited to perform "Die Zauberflöte" at the new national theatre in Athens and appeared in 15 performances. In 2007, she was selected as Papagena in "Die Zauberflöte" at the Nikikai production, and also performed the same role in 2015 under the direction of Amon Miyamoto. She has performed as Adele and as Ida in "Die Fledermaus" with the Suntory Hall Opera Academy. In 2014, she performed as Juliette in "Die tote Stadt" conducted by Ryusuke Numajiri at Biwako Hall. She is a member of Nikikai. Since her first appearance at PMF in 2013, she has served as MC in the PMF Link Up Concert. At PMF 2014, she served as MC and appeared at the PMF Opening Ceremony & Concert, the Stage Opera "Ariadne auf Naxos" as Najade, and the Special Concert I. This is her fifth appearance at PMF. 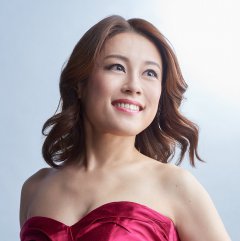