Born in Sendai, Yuya Tsuda studied under Pascal de Vaillant at the Universität der Künste Berlin after completing his master's degree at the Tokyo University of the Arts. In 2007, he won the 1st prize, the Audience Award, and the French Ambassador to Japan Award at the 3rd Sendai International Music Competition. He graduated with highest distinction from the Universität der Künste Berlin in 2011, later obtaining his German national performer’s diploma. In the same year, he won the Munich International Music Competition Special Award.

An active chamber musician, Tsuda has performed with many well-known musicians. In particular, he formed the Trio Accord with Kei Shirai (violin) and Daiki Kadowaki (cello), performing throughout Japan. In October 2008, the trio’s first CD, with works by Beethoven, was released to great acclaim.

Tsuda studied under Pascal Devoyon, Gabriel Tacchino, Miyoko Goldberg Yamane, Yu Kakuno, and Ruriko Shibuya. He is currently an associate professor at the Tokyo University of the Arts.

This is his first appearance at PMF, where he will perform on Sunao Goko's violin recital. 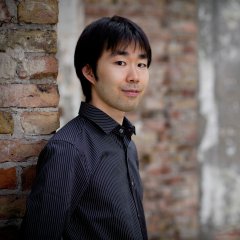