In 1996, at the age of 23, Shuntaro Sato was appointed Associate Conductor of the English Chamber Orchestra after his debut with them at the Barbican, London. He has since conducted the orchestra in more than 50 concerts on tours to Germany, France, Italy, Austria and Turkey as well as in the UK in venues including the Royal Festival Hall, Royal Albert Hall, Barbican Centre, Birmingham Symphony Hall and Manchester Bridgewater Hall. He made his first recording with the orchestra in 1998: flute concertos by Nielsen and Reinecke with William Bennett, the principal flautist of the ECO.
In the UK, in addition to his concerts with the ECO, Shuntaro made his debut with the LPO (1998) with whom he worked regularly including a tour 2001. His debut with the Philharmonia in1999 was followed by further concerts including a tour in 2006, and he continues his association with the Bournemouth Symphony Orchestra with whom he has worked every year since his debut in 2009 and with whom he toured in 2013.
Shuntaro Sato made his debut with the Helsinki Philharmonia Orchestra in 1998 which led to concerts with practically all the Finnish orchestras, including the Finnish Radio Symphony Orchestra, the Sinfonia Lahti and the Tapiola Sinfonietta.
He made his US debut with the Boston Chamber Orchestra in 1997 and was subsequently invited to be a guest conductor at the Tanglewood Festival. He made his debut in the Netherlands in 2002 with the Radio Symphony Orchestra, Netherlands. This was followed by his Spanish debut where he conducted the Orquesta Pablo Sarasate in Pamplona.
Born in Japan in 1972, Shuntaro Sato read Politics at the University of London and later studied violin at the Royal Academy of Music where he formed an orchestra and conducted all Beethoven"s symphonies. As a conductor his teachers have included Diego Masson, Geraint Jones, Lawrence Leonard and Janos Furst.
In 2003 he was elected an Associate of the Royal Academy of Music (ARAM).
In 2006 a recording of Bach and Mozart Arias with Hyunah Yu and the Prague Philharmonia was released from EMI.
In 2016-2019 he was appointed Conductor of the Sapporo Symphony Orchestra.
This is his second appearance at PMF since 2013. 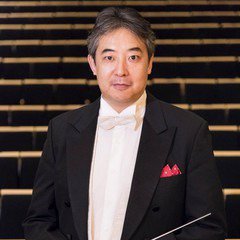