Eriko Sasaki began playing the violin at the age of 5. She graduated from the Music High School of the Faculty of Music of the Tokyo University of the Arts. She received a Bachelor’s and a Master’s Degree from the Tokyo University of the Arts (Geidai). In 2005, she finished the postgraduate diploma course at the Royal Academy of Music, London (RAM). She was awarded the Fukushima and Ataka Prizes from Geidai and the Benjamin Dale Award as well as the Wilfred Parry Prize from RAM. As a soloist she has performed with many orchestras and ensembles, including a performance at the White House. She attended Argerich’s Meeting Point in Beppu and was a member of the orchestra for Geidai’s first overseas concert tour. In 2004, she was chosen as a concertmaster for the Pacific Music Festival Orchestra and was invited to attend the following season. Her violin teachers include Prof. György Pauk, Ms. Teiko Maehashi, Prof. Hiroyuki Yamaguchi, Prof. Kazuki Sawa, Prof. Yasuko Otani, Prof. Hiroaki Ozeki, and Ms. Megumi Fujita, among many others. She is the Violin II Vorspieler of the New Japan Philharmonic and a member of the Yokohama Sinfonietta. 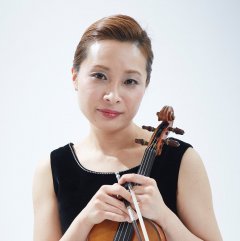