Stathis Karapanos was born in Athens, Greece in 1996. Determined to become a flute soloist from the age of 5, he enrolled in the National Conservatory in Athens at an early age, and was accepted into the National School of Music Lyubomir Pipkov in Sofia at 13, and in addition to his studies he played regularly with the National Youth Orchestra, won various international competitions, and performed as soloist with professional orchestras.

He entered the Hochschule für Musik Karlsruhe in 2013, at the age of 16, and graduated in 2018 with distinctions. He maintains close ties with the university, continuing to perform as a regular member of the University Orchestra, and premiering works from the composition class of Wolfgang Rihm, and he often plays both flute and piccolo in the State Theater of Karlsruhe and various chamber music ensembles in Karlsruhe.

Karapanos has performed as soloist with numerous orchestras and ensembles, including the Athens State Symphony Orchestra (Greece), FM Classic Radio Orchestra (Bulgaria), Ensemble Zeitlose Musik (Germany), and many more. He is also an active recitalist, currently performing a duo-recital series with Christoph Eschenbach on piano. His unceasing desire to seek inspiration and to explore has led him to play the transverse flute, piccolo, alto-, bass-, and contrabass-flutes, in an array of contemporary styles even including free jazz and hard rock.

In 2016 Karapanos was appointed Director of the Classical Music Department of the Santorini Arts Factory festival. In 2017 he was invited to play first flute with the Greek Youth Symphony Orchestra under the baton of Maestro Dionysis Grammenos, and shortly after, he was appointed First Principal Flute of the Athens State Symphony Orchestra, a post he held until he began his current studies with Prof. Philippe Bernold at the Conservatoire National Superieur in Paris. 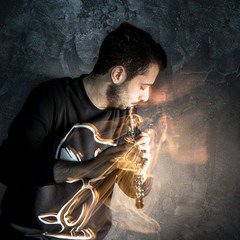