Eiji Oue is Laureate Conductor of the Osaka Philharmonic Orchestra and Honorary Conductor of the NDR Radiophilharmonie in Hanover. He studied under Hideo Saito at Toho Gakuen. In 1978, he was invited by Maestro Seiji Ozawa to spend the summer studying at the Tanglewood Music Center. It was there that he met Leonard Bernstein, who became his long-time mentor and colleague, touring together for concerts around the world.

Oue also records actively, receiving Grammy nominations 2 years in a row – in 1996 for his recording of Stravinsky’s Firebird and in 1997 for Mussorgsky’s Pictures at an Exhibition. In 2004, he received the Grammy Award for his CD “Casa Guidi,” a collection of works by Dominick Argento. He also received the Cross of Merit First Class of the Lower Saxony Order of Merit in 2009.

This is his fourth appearance at PMF after appearances in 1990, 1991, and 1992. He will perform on the PMF Host City Orchestra Concert with the Sapporo Symphony Orchestra. 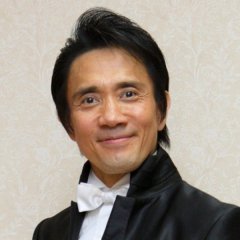