In spring 2018 Vedernikov conducted a highly acclaimed production of the Ring Cycle at Odense’s new Odeon Theatre with an exciting cast including Torsten Kerl as Siegfried, Catherine Foster and Jennifer Wilson as Brünnhilde, and Gerhard Siegel as Mime, a major project which concluded his tenure there as Chief Conductor. Elsewhere in the field of opera, Verdenikov has frequently conducted at the Komische Oper Berlin, and has worked throughout Italy at La Scala in Milan, La Fenice in Venice, Teatro Comunale in Bologna, Teatro Regio in Turin, and the Opera di Roma. He has conducted productions at the Metropolitan Opera in New York, the Bastille Opera in Paris, the Finnish National Opera, Zurich Opera, Frankfurt Opera, Royal Stockholm Opera, and Savonlinna Opera Festival, as well as the Deutsche Oper in Berlin.

Vedernikov was born in Moscow in 1964, and was raised in a musical family. His father, also named Alexander, was famed throughout the Soviet Union and beyond for his interpretations of such roles as Boris Godunov and Kutuzov in Prokofiev’s War and Peace; his mother, Natalia Gureyeva was a professor of organ at the Moscow Conservatory.

Vedernikov served as Guest Conductor at PMF 2013. This is his second appearance at PMF. 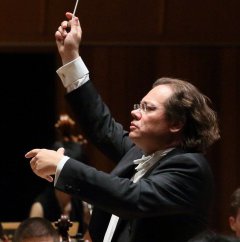