Daniel Matsukawa has been principal bassoon of the Philadelphia Orchestra since 2000. He studied conducting privately with Otto Werner Mueller, who was the head of the Conducting Department at the Curtis Institute of Music. He has conducted a number of concerts at the Curtis Institute of Music and in October 2016 he led the Virginia Symphony Orchestra for the first time. Matsukawa"s orchestral conducting debut took place at PMF in 2009 for the festival"s 20th anniversary, when he conducted a joint program of the PMF Orchestra and the PMF Anniversary Orchestra - the latter being specially formed for the memorial year and consisting of PMF alumni - garnering Maestro Christoph Eschenbach"s appraisal of Matsukawa as a new "conducting star." In January 2011, Matsukawa conducted the PMF Chamber Orchestra, also consisting of PMF alumni, performing Mozart"s Clarinet Concerto with former Principal Clarinet of the Wiener Philharmoniker Peter Schmidl as soloist, and Beethoven"s Symphony No. 3 "Eroica." With the same orchestra, he toured Sapporo, Hamamatsu (Shizuoka Prefecture), and Tokyo, receiving glowing reviews. In recent years, he has conducted the PMF Link Up Concert, based on the educational program of New York"s Carnegie Hall, as well as memorial concerts for PMF-founder Leonard Bernstein. He was a member of the PMF Orchestra from 1992 to 1994 and has served as PMF bassoon faculty every year since 2001, making this his seventeenth faculty appearance at PMF. 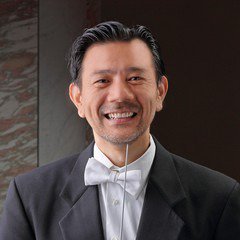