Jun Märkl has long been known as a highly respected interpreter of the core Germanic repertoire from both the symphonic and operatic traditions, and more recently for his refined and idiomatic explorations of the French impressionists. His long-standing relationships with the state operas of Vienna, Berlin, Munich, and Semperoper Dresden have in recent years been complemented by his Music Directorships of the Orchestre National de Lyon (2005-11) and MDR Symphony Orchestra Leipzig (through 2012). For the 14/15 and 15/16 seasons he is Principal Conductor of the Basque National Orchestra. In 2012 he was honored by the French Ministry of Culture with the Chevalier de l"Ordre des Arts et des Lettres in recognition of his achievements in Lyon. In Japan, he has often conducted the NHK Symphony Orchestra and Mito Chamber Orchestra, and recently accepted the position of Invited Professor at the Kunitachi School of Music in Tokyo. In January 2015 he conducted the Yomiuri Nippon Symphony Orchestra for the first time.

Märkl made his Royal Opera House debut with Götterdämmerung in 1996 and his Metropolitan Opera debut with Il Trovatore in 1998. He has conducted the complete Ring Cycle at the Deutsche Oper and at the New National Theatre in Tokyo, and toured to Japan in 2007 with the Semperoper Dresden (Tannhäuser). He has recorded a wide variety of repertoire with both the Royal Scottish National Orchestra and Orchestre National de Lyon.

Born in Munich, Märkl studied violin, piano, and conducting at the Musikhochschule in Hannover, going on to study with Sergiu Celibidache in Munich and Gustav Meier in Michigan. In 1986 he won the Deutsche Musikrat conducting competition and a year later won a scholarship from the Boston Symphony Orchestra to study at Tanglewood with Leonard Bernstein and Seiji Ozawa. Soon afterwards he had a string of appointments in European opera houses followed by his first music directorships at the Staatstheater in Saarbrücken (1991-94) and at the Mannheim Nationaltheater (1994-2000). 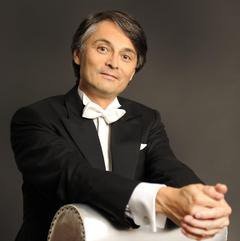