Andris Poga graduated in conducting from the Jazeps Vitols Latvian Academy of Music. He also studied philosophy at the University of Latvia and from 2004 to 2005 was taught conducting by Uros Lajovic at the Universität für Musik und darstellende Kunst Wien. While still a student, he took part in master classes of conductors including Mariss Jansons, Seiji Ozawa and Leif Segerstam.
Since 2007, when he received the Latvia Great Music Award, Poga has maintained close relationships with the orchestras of his country: the Latvian National Symphony Orchestra, Latvian National Opera, and Riga Professional Symphonic Band, which appointed him Music Director and Chief Conductor from 2007 to 2010.
In 2010, he was also awarded the First Prize of the Evgeny Svetlanov International Conducting Competition in Montpellier. After this success, in 2011 Poga was nominated as Assistant Conductor to Paavo Järvi at the Orchestre de Paris for three years and, in 2012, Assistant Conductor of the Boston Symphony Orchestra, appearing both in the BSO concert series and at the Tanglewood Music Festival.
Poga has gone on to conduct many prestigious orchestras such as the Boston Symphony Orchestra, Orchestre de Paris, NHK Symphony Orchestra, Israel Symphony Orchestra, and the Moscow City Symphony - Russian Philharmonic.
His upcoming engagements include the Gewandhaus Leipzig, Münchner Philharmoniker, Orchestre de Paris, Boston Symphony Orchestra, Saint Petersburg Philharmonic Orchestra, New Japan Philharmonic Orchestra, Orchestre Nationale de France and the Orchestre de Chambre de Lausanne.
In September and December 2013, Poga replaced Maestro George Prêtre and Mikko Franck at the last minute with the Orchestre de Paris at Salle Pleyel in works of Poulenc, Tchaikovsky's 5th Symphony, and Shostakovich's 7th Symphony, with tremendous success. In October 2014 he embarked on a triumphal Asian tour dedicated to Strauss.
Poga has been Musical Director of the Latvian National Symphony Orchestra since November 2013. In May 2015, their first concert at the Paris Théâtre des Champs Elysées, of Verdi's Requiem, was rewarded with a standing ovation.
This is his first appearance at PMF. 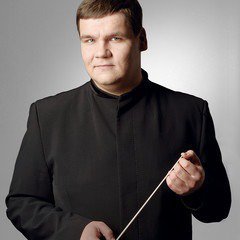