Fabio Luisi on Gaetano d"Espinosa: "... one of the biggest talents as a conductor!"

Gaetano d"Espinosa has Sicilian origins and is considered as one of the most interesting talents of the emerging conductors" generation. From 2003 till 2008 he was concert master of the Saxony State Orchestra Dresden where he premiered the concerto for violin n°1 composed by himself under the direction of Christian Arming.

Furthermore, in 2010 he conducted "La Traviata" at Semperoper Dresden and appeared as assistant to Fabio Luisi at the Pacific Music Festival in Japan.

Born in the year 1978 in Palermo, Gaetano d"Espinosa studied piano, violin and composition in his hometown. In 1992 he scored the highest award at the National Violin Competition "Vittorio Veneto". In 1995 he changed to Milan where he went on with his violin studies apprenticed to Salvatore Accardo at the "Walter Staufer"-Academy. In 1996 he won the highest award of the International Violin Competition "Rovere d"Oro". Later, numerous appearances as a soloist with Italian symphony orchestras followed. 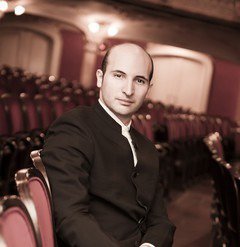