Midori is a visionary artist, activist and educator whose unique career has been dedicated to exploring and building connections between music and the human experience. Since her debut with the New York Philharmonic, at age 11, Midori has performed with the world"s top orchestras including the London Symphony, Staatskapelle Dresden, Mahler Chamber Orchestra, Chicago Symphony, Orchestre Symphonique de Montreal, Cincinnati Symphony, Pittsburgh Symphony and Czech Philharmonic. In addition, she has collaborated with leading musicians such as Christoph Eschenbach, Daniele Gatti, Alan Gilbert, Susanna Mälkki, Robert Spano, James Conlon and Paavo Järvi, among others. Midori"s DVD of J.S. Bach"s Sonatas and Partitas for Solo Violin is being released in 2017. Additional recent recordings include a concerto "DoReMi" written by Peter Eötvös and dedicated to her, with the composer at the podium, a Grammy-winning disc of the Hindemith"s violin concerto with Christoph Eschenbach conducting the NDR Symphony Orchestra, and recital discs with sonatas by Shostakovich, Janáček, and Bloch.
She has founded various not-for-profit musical organizations, both in the U.S. and in Japan. These non-profits seek to inspire all kinds of people, some by providing instruction to young children, some by bringing highest quality performances to hospitals, institutions, and difficult-to-access communities around the world. For such socially-conscious commitments, she has been named a UN Messenger of Peace, among many notable honors. Midori joins the faculty of the Curtis Institute of Music in 2018. She is currently a Distinguished Professor of Violin and the Jascha Heifetz Chair holder at the USC Thornton School of Music while serving as a guest professor at both Soai University in Osaka and the Shanghai Conservatory of Music, and as an honorary professor at Beijing"s Central Conservatory of Music. She continues in her role as a distinguished visiting artist at the Peabody Institute of Johns Hopkins University.
Born in Osaka, Japan in 1971, Midori began her violin studies with her mother. Midori plays the 1734 Guarnerius del Gesù "ex-Huberman". For more information about Midori visit www.GoToMidori.com. 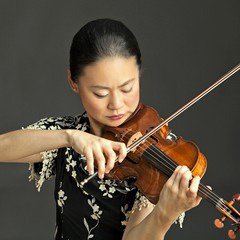