One of the most sought-after basses in the world, Mikhail Petrenko is known for his exceptional operatic performances and recitals. His vast range of operatic roles include Heinrich (Lohengrin), Hunding (Die Walküre), Hagen (Götterdämmerung), and King Marke (Tristan und Isolde), to name but a few. Recent notable performances include the world premiere of an opera-ballet double bill of Bluebeard’s Castle with the Cleveland Orchestra in collaboration with the Joffrey Ballet, Khovanshchina (Prince Ivan Khovansky) at Teatro alla Scala, Boris Godunov (title role) at the Grande Théâtre de Genève, Elektra (Oreste) at the Metropolitan Opera, and Don Giovanni (Leporello) at the Deutsche Staatsoper Berlin.
He regularly works with renowned conductors, including Valery Gergiev, Esa-Pekka Salonen, Simon Rattle, and Daniel Barenboim, appearing at the Wiener Staatsoper, Netherlands Opera, Deutsche Staatsoper Berlin, La Scala, and the Aix-en-Provence, Verbier, Salzburg, Lucerne, and BBC Proms festivals, among others. Equally established on the concert platform, he recently performed with the BBC National Orchestra of Wales and Thomas Søndergård, the Rotterdam Philharmonic and Yannick Nézet-Séguin, and both the NDR Elbphilharmonie Orchestra and Deutsches Symphonie-Orchester with Ingo Metzmacher.
Operatic engagements this season and beyond include The Fiery Angel (Inquisitor) at the Theater an der Wien, and Wagner’s Ring Cycle at the Mariinsky Theatre. Concert engagements include performances of Shostakovich’s Symphony No. 14 with the Orchestre de la Suisse Romande and the Finnish Radio Symphony Orchestra, Mahler’s Symphony No. 8 at the Konzerthaus Berlin, the KunstFestSpiele Herrenhausen, Hannover, and the Pacific Music Festival.
Petrenko’s many recordings include Die Walküre conducted by Gergiev and released on the Mariinsky Label, Gounod's Romeo et Juliette conducted by Nézet-Séguin and released on Deutsche Grammophon, and Rachmaninov’s The Bells with the Berliner Philarmoniker conducted by Sir Simon Rattle and released on EMI. He also appears as Leporello in a film version of Don Giovanni (Kasper Holten’s Juan).
Petrenko is a graduate of the St Petersburg State Rimsky-Korsakov Conservatoire in the class of Professor Minzhilkiev and has received awards including diplomas at the third International Rimsky-Korsakov Competition (1998), the first Elena Obraztsova Competition and he was a finalist and diploma-winner at the Maria Callas New Verdi Voices Competition, Parma (2000).
This is his second consecutive appearance at PMF. 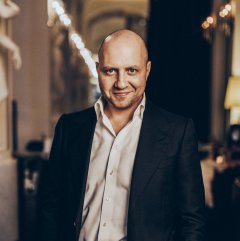