Concert organist and improviser Dr. Martin Gregorius (b. 1991 in Gdynia, Poland), graduated from the Academy of Music in Gdańsk (Poland), Hochschule für Musik Detmold (Germany), Conservatoire National Supérieur de Musique et de Danse de Paris and Conservatoire National Supérieur Musique et Danse Lyon (France), where he received degrees in organ, improvisation, music theory with composition and church music. Throughout his education he studied under Michel Bouvard, Hanna Dys, Thierry Escaich, François Espinasse, László Fassang, Olivier Latry, Philippe Lefebvre, Tomasz Adam Nowak, Roman Perucki, Pierre Pincemaille and Liesbeth Schlumberger. Martin Gregorius has matured and refined his musical interpretation by participating in master classes with world class musicians such as: Paolo Crivellaro, Pieter van Dijk, Andrés Cea Galán, Ludger Lohmann, Michael Radulescu, Louis Robilliard, Wolfgang Seifen and Wolfgang Zerer. In 2017 he obtained his doctor"s degree in organ performance at the Academy of Music in Poznań (Poland), specializing his thesis in: "Composition and improvisation reflected by specific artists from the French Organ School".
Martin Gregorius has received numerous prizes for organ playing and improvising throughout Europe, including Austria, Germany, Italy, Luxemburg and Poland. Among his highest distinctions are the first prizes in the International Organ Improvisation Competitions in Schlägl (Austria) and Westfalen Impro 6 in Münster (Germany). Along with competitions, Martin Gregorius has also been awarded with scholarships from the President of the Republic of Poland and the Ministry of Culture and National Heritage of Poland. In 2012 he received the Young Artist Prize from the President of Gdańsk (Poland) and in 2015 the "artNoble-Prize". In 2016 he obtained a scholarship from Alfred Toepfer Foundation. Throughout his musical career, Martin Gregorius has been invited to perform in many festivals and concert halls, including cathedrals in Angers, Fulda, Frombork, Luxemburg, Mainz, Munich and the Polish Baltic Philharmonic in Gdańsk. Many of his recitals have been broadcasted by French, German and Polish television and radio. Giving master classes and lectures, Martin Gregorius has also been able to develop his interests in pedagogy and musicology.
For the concert season 2017/18 Martin Gregorius has been appointed the 19th Organist in Residence of the Sapporo Concert Hall Kitara in Japan. During his stay he has been performing in prestigious venues, such as Art Tower Mito, Suntory Hall and Sumida Triphony Hall in Tokyo. He has been working with world-renowned conductors such as Matthias Bamert, Simon Gaudenz, Yuki Kakiuchi, Max Pommer, Shuntaro Sato, Kanade Yokoyama and reputed orchestras such as Sapporo Symphony Orchestra and Nordwestdeutsche Philharmonie. 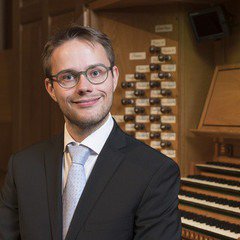