PMF AMERICA [second half of the festival]hornPittsburgh Symphony OrchestraWilliam Caballero

The 2018-2019 Pittsburgh Symphony Orchestra (PSO) season represents William Caballero's 29th year as its Principal Horn. Before joining the PSO in 1989 under Maestro Lorin Maazel, Caballero held Principal Horn positions with the Houston Symphony, Houston Grand Opera, and Hartford Symphony. He was also a member of the Montreal Symphony and Montreal Opera. Caballero graduated from the New England Conservatory where he studied with Richard Mackey and Thomas Newell. Currently, Caballero is the Associate Teaching Professor of Horn at the Carnegie Mellon University School of Music. Previously he held adjunct teaching positions at Indiana University and Rice University. In collaboration with the online music teaching company ArtistWorks.com based in Napa, California, Caballero released the only complete online horn curriculum, available for horn students worldwide, in 2012. Caballero solos regularly with the PSO, most recently in 2015 performing the Schumann Konzertstück for 4 horns and orchestra. In 2014, under the baton of PSO's present Maestro Manfred Honeck, Caballero performed the world premiere of the Robert Levin Edition of Mozart's Horn Concerto No. 1, and in 2012 performed and recorded the PSO premiere of the Strauss Horn Concerto No. 1. This is his thirteenth appearance at PMF since 2005. 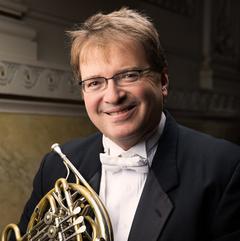