Stefán Ragnar Höskuldsson is the principal flutist of the Chicago Symphony Orchestra (CSO), as well as a distinguished international soloist and chamber musician. He was appointed to the position in 2015 by music director Riccardo Muti. Prior to joining the CSO, he served as principal flute of the Metropolitan Opera Orchestra from 2008-2016. An avid educator, Höskuldsson is currently on the flute faculty of DePaul University in Chicago and has given master classes at the Juilliard School, Manhattan School of Music, Mannes College of Music, Guildhall School of Music and Drama, and the Royal Academy of Music. He has recorded for the Naxos label's American Classics series and in 2015 he released his debut solo album, Solitude on the Delos label. A native of Iceland, Höskuldsson attended the Reykjavik School of Music where he studied with Bernhard Wilkinson. Following his graduation, Höskuldsson attended the Royal Northern College of Music in Manchester, England, where he studied with Peter Lloyd and Wissam Boustany. This is his fifth appearance at PMF since 2011. 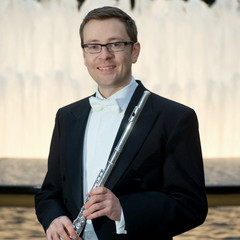