PMF AMERICA [second half of the festival]celloMetropolitan Opera OrchestraRafael Figueroa

Principal cellist with the Metropolitan Opera Orchestra since 1995, Rafael Figueroa has appeared as a soloist and chamber musician throughout the US, Europe, South and Central Americas, Korea, and Japan. He is the winner of many distinguished competitions and awards including the First Prize at the Gregor Piatigorsky Competition in Boston, the Bronze Medal at the International Pablo Casals Competition in Budapest, and winner of the concerto competition at the Third American Cello Congress. Figueroa has been a frequent soloist with the Casals Festival in Puerto Rico as well as the Casals Festival in Tokyo, Aspen Music Festival, Marlboro Music Festival, the Musique et Vin au Clos Vougeot in Burgundy, the Cape Cod Chamber Music Festival, and the Pacific Music Festival. Figueroa made his Carnegie Hall solo debut together with concertmaster David Chan and the Metropolitan Opera Orchestra in the Brahms Double Concerto led by James Levine, to critical acclaim. He completed his studies at Indiana University under Janos Starker and Gary Hoffman. This is his ninth appearance at PMF since 2009. 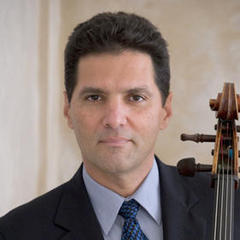