Stephen Rose is Principal Second Violin of the Cleveland Orchestra, a position he has held since 2001. He joined the Orchestra in 1997 as a member of the first violin section and made his solo debut with the Orchestra in 2011. He again appeared as a soloist with the orchestra in 2013. He has been heard in solo appearances and chamber music concerts throughout North America, Europe, Asia and Australia. From 1992-96, he was the first violinist of the Everest Quartet, top prizewinners at the 1995 Banff International String Quartet Competition. Rose is a faculty member at the Cleveland Institute of Music (CIM), where he maintains a studio and directs the orchestral violin repertoire classes. He also serves on the faculty of Kent/Blossom Music, the National Orchestral Institute, and the New World Symphony. A participant at many summer music festivals, he regularly appears at the Seattle Chamber Music Festival, Mimir Chamber Music Festival, and Colorado College Music Festival. Rose received a Master of Music degree from the Eastman School of Music, preceded by a Bachelor of Music degree from CIM. He was honored with the CIM Alumni Achievement Award in 2005. This is his twelfth appearance at PMF since 2006. 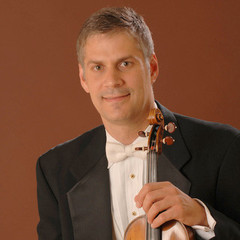