PMF AMERICA [second half of the festival]violinMetropolitan Opera OrchestraDavid Chan

David Chan is the concertmaster of the Metropolitan Opera Orchestra and an active soloist, recitalist, and chamber musician. Chan made his New York debut at Lincoln Center's Avery Fisher Hall in 1995, performing Paganini's Concerto No. 2 under the direction of Hugh Wolff, and his Carnegie Hall debut during the 2002-2003 season, performing the Brahms Double Concerto with the Metropolitan Opera Orchestra under the baton of James Levine. In 2012, he again appeared as soloist at Carnegie Hall with the Metropolitan Opera Orchestra in a performance of Gubaidulina's "In Tempus Praesens" conducted by Fabio Luisi. His recordings include a recital program, a disc of two Paganini concertos with the English Chamber Orchestra, and an album of violin/cello duos with cellist Rafael Figueroa. He is the founder and artistic director of Musique et Vin au Clos Vougeot in the Burgundy region of France. A native of San Diego, Chan began his musical education at the age of four, and his principal teachers were Dorothy DeLay, Hyo Kang, and Michael Tseitlin. He first gained international recognition when, at the age of seventeen, he won a top prize at the Tchaikovsky International Competition in Moscow. A graduate of both Harvard University and the Juilliard School, Chan is currently on the faculty at Juilliard. This is his ninth appearance at PMF since 2008. 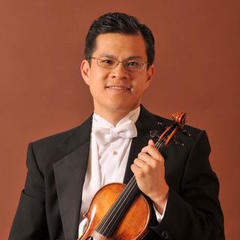