As a soloist he has performed with the Berlin Philharmonic conducted by Daniel Barenboim and Simon Rattle, and with the Munich Philharmonic under James Levine. He regularly gives concerts with Seiji Ozawa. Chamber music forms an essential part of Baborák's musical life. He is the artistic leader and conductor of the Czech Sinfonietta, Prague Chamber Soloists, Czech Horn Ensemble, Afflatus Quintet, and Baborák Ensemble. After eight seasons as principal horn with the Berlin Philharmonic, Baborák decided to leave the orchestra in order to focus on a solo career, as well as teaching and conducting.

Radek Baborák turned seriously to conducting in 2010. Having spent fifteen years as the principal horn in several orchestras, namely the Berliner Philharmoniker, Munich Philharmonic, Bamberg Symphonic and Czech Philharmonic, he left behind the secure life of an orchestral member and set off on a journey as a horn soloist, chamber music player, teacher and conductor. In a completely natural way he is continuing the tradition of the soloists and conductors who wish to realise their musical dreams and visions not only through an instrument at which they excel but, enriched by their experiences of orchestral and chamber music, focus their talents towards the interpretation of symphonic compositions as conductors. Maestro Daniel Barenboim is an example of such a conductor, and for Baborák a model figure, inspiration and mentor. Baborák's conducting debut came during a European tour with the Mito Chamber Orchestra (MCO) in 2008, when he was asked by members of the orchestra to step in for the indisposed maestro Seiji Ozawa. Since this initial, pivotal moment, Radek Baborák has conducted a number of orchestras, including the Prague Symphony Orchestra FOK, State Philharmonic Brno, Prague Philharmonia PKF, the National Theatre Orchestra, Staatsorchester Rheinische Philharmonie Koblenz, Hyogo PAC Orchestra, Mito Chamber Orchestra, Gunma Symphony Orchestra, TOHO University Orchestra, New Japan Philharmonic. He has collaborated with the prominent soloists: Yefim Bronfman, Saleem Abboud Ashkhar, Marie-Piere Langlamet, Dalibor Karvay, Jana Boušková and Janne Saksala. 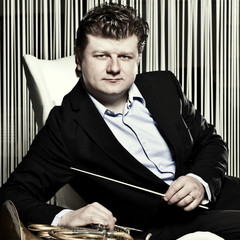