Born in 1988, Marcos García Vaquero received his first trumpet lessons at the age of seven in his hometown of Punta Umbria (Huelva) before going on to study at the University of Music and Performing Arts Huelva, the Musikene Music School in San Sebastian, and the University of Music "Hanns Eisler" Berlin. His teachers include Luis González, Javier Simó, Reinhold Friedrich, William Forman, and Martin Wagemann, and he has participated in masterclasses by renowned trumpet virtuosos including Sergei Nakariakov, Gabòr Tarkovik, and Francisco Pacho Flores. García Vaquero won the first prize in the national competition "Yamaha-Alnafil," which awarded him recording sessions of music by the Spanish composer Santiago Baez. In the 2014/15 and 2015/16 seasons he was awarded a scholarship from the Humboldt University "Wardwell-Stipendium."
In 2017, García Vaquero became Co-Principal Trumpet at Orquesta Sinfónica de Madrid. He is also a passionate chamber musician, performing as a member of the European Brass Ensemble, Silver Brass Quintet, and Andalusian Brass Ensemble. 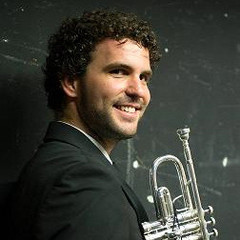