Artists performing at the PMF 2015 Link Up ConcertconductorDaniel Matsukawa

Born in Argentina to Japanese parents, Daniel Matsukawa began studying the bassoon at age thirteen. He attended the Juilliard School before studying under Bernard Garfield at the Curtis Institute of Music. Matsukawa made his solo debut at Carnegie Hall at age eighteen and since then has appeared as soloist with many orchestras around the world including the Philadelphia Orchestra, the National Symphony Orchestra, and the Sapporo Symphony Orchestra. He has been Principal Bassoon of the Philadelphia Orchestra since 2000. Prior to that, he served as Principal Bassoon with the Saint Louis Symphony, Virginia Symphony, and Memphis Symphony Orchestras. He teaches regularly at the National Orchestra Institute. He is on the faculties of the Curtis Institute of Music and Temple University. He was a member of the PMF Orchestra from 1992 to 1994. This is his fifteenth visit to PMF as a faculty member since 2001. One of the highlights of his career at PMF was his performance of the Mozart Bassoon Concerto with the PMF Orchestra under the baton of Valery Gergiev.

Matsukawa began conducting studies privately with Otto Werner Mueller, who is the head of Conducting Department at the Curtis Institute of Music. He made his orchestral conducting debut at PMF, in 2009, for the festival's 20th anniversary, and he conducted a joint program of the PMF Orchestra and the PMF Anniversary Orchestra, the latter being specially formed for the memorial year of past festival alumni. Matsukawa has received glowing reviews for his conducting at PMF. 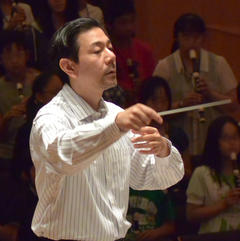